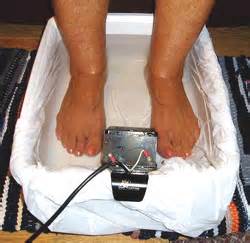 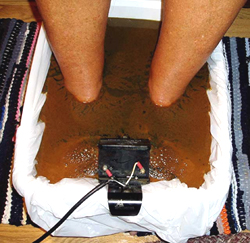 We are familiar with the power of nature to heal. Medicines are often first conceived and made as extracts from nature’s plants and herbs. The ion cleanse foot detox also takes its cues from nature. The positive effects of ions in nature are well known – the sense of well-being you feel from the pounding surf along the beach or near the spraying mist of a waterfall, or the sense of energy you experience before or after a thunderstorm. These natural sources of energy generate tens of thousands of beneficial ions that you breathe into your body and absorb through your skin.

Waterfalls and the surf on the beach produce ions as water droplets break apart from the energy of their movement and collisions. Ionic footbaths create an abundance of ions as water molecules break apart by means of the electrolysis of water – as a direct current is passed through an array. IonCleanse® footbath users commonly observe the same sense of well-being, alertness, and relaxation experienced in natural settings. Users also routinely observe many other health benefits from their sessions, including at the most basic level more energy and improved sleep patterns.

Water exists as a chemically neutral molecule of two hydrogen atoms combined with one oxygen atom. However, water in its natural state also self-ionizes in small amounts all of the time, breaking apart into H+ and OH– ions and then recombining to the neutral H2O. When an array is placed in the water of a footbath and a direct current is passed through its poles, ionization is magnified many times. With the IonCleanse® dual polarity array electrical flow alternates between the positive and negative poles of the array. When current flows to the positive pole, water breaks down into an abundance of OH– ions according to the formula: 4H2O + 4 e– (electrons) —> 2 H, + 4 OH–. When the current flows to the negative pole, water breaks down into an abundance of hydrogen ions according to the formula: 2H2O —> O2 + 4 H+ + 4e–. Negative ions seek to combine with positively charged atoms and molecules and positive ions seek to combine with negatively charged atoms and molecules.

Ions can not only make you feel good, they can do good. Research shows that negative ions such as released during the decomposition of water increase the flow of oxygen to the brain – increasing mental alertness, and elevating mood by affecting serotonin levels. It is thought that negative ions have a positive effect on the immune system, as well. The essence of the power of ions comes from their electrical charge, which makes them react with other ions, combining with them to produce chemical changes. Toxins in the body exist in charged, or ionic, form.

As you finish the Ion Cleanse Foot Detox, don’t think that the detoxification stops when you take your foot, hand, elbow etc. out of the bath. It has begun a detoxifying process within the body that you can continue and enhance at home with the help of supplementation geared towards building and supporting specific organs pinpointed during the Ion Cleanse. For example: A cleanse indicated heavy metals being detoxified from the body. The elimination process has been “jump started.” Why wait until the next scheduled Ion Cleanse? While at home you could continue the process by using Heavy Metal Detox from Nature’s Sunshine, or Lymph-tone I or Metal-Chord from Energetix.