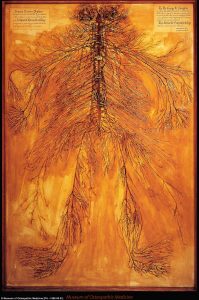 A detailed dissection of the human body’s nervous system

Two main subdivisions: the somatic, or voluntary, and the autonomic, or involuntary, component.

Nerves: cylindrical bundles of fibers that start at the brain and central cord and branch out to every other part of the body.

Neurons send signals to other cells through thin fibers called axons which cause chemicals known as neurotransmitters to be released at junctions called synapses. The synapse gives a command to the cell and the entire communication process typically takes only a fraction of a millisecond.

Sensory neurons react to physical stimuli such as light, sound, and touch, and send feedback to the central nervous system about the body’s surrounding environment. Motor neurons transmit signals to activate muscles or glands. Cranial nervous system: nerves that connect the brain to the eyes, mouth, ears and other parts of the head.

Diseases of the nervous system:

Nerve  System disorders cause functional difficulties which result in conditions such as:

Symptoms and their Emotions